Wedding Announcement in The Times!

Engagements and marriages: ‘We kind of didn’t get on’ 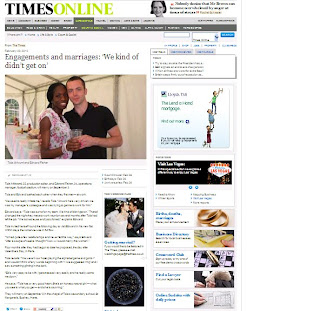 Tola and Edward loathed each other when they first met — at work.

“He used to really irritate me,” recalls Tola. “At work he’s very driven. He was my manager’s colleague and was trying to get me to work for him.”

Edward says: “Tola was sort of on my team. We kind of didn’t get on.” That all changed the night they met at a work reunion several months after Tola had left the job. “We locked eyes and just clicked,” explains Edward.

Tola invited herself round the following day to visit Edward in his new flat. Within days the romance was in full flow.
“I’d had quite a few relationships and never felt this way,” says Edward. “After a couple of weeks I thought ‘Wow — I could marry this woman’.”
Four months after they had begun to date he proposed, the day after Valentine’s Day, in Paris.
Tola recalls: “We were in our hotel playing the alphabet game and got to ‘r’ and I couldn’t think of any words beginning with ‘r’. He suggested ‘ring’ and I saw something glinting in the dark.
“Ed’s very easy to be with. I get stressed very easily and he really calms me down.”

He says: “Tola has a very good heart. She’s an honest, natural girl — what you see is what you get — and she is stunning.”
They will marry on September 3 in the chapel of Tola’s secondary school, St Margaret’s, Bushey, Herts.

2 responses to “Wedding Announcement in The Times!”