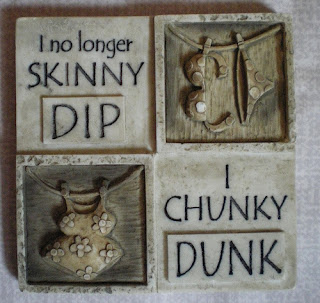 We all know we're going to hit the gym in January anyway so why not get a head start? I've been trying to avoid wheat and dairy as they make me feel a bit bloated but I've been succumbing to the temptations of Pret's blueberry muffins for too long now and it needs to stop.

We tend to justify our overeating by saying, "It's ok, it's Christmas!" but it's not ok really is it because the feeling of gluttony afterwards is awful. (I've been known to have problems standing up after a Christmas dinner - or feast as it was in my mum's house - but maybe that's just me.)

The Bible warns us against gluttony - Proverbs 23:20-21 for
reference ;) -
and it's one of the things we're battling with in our household especially
since Waitrose decided to pop up
on our street in early December. Great.

Ok so getting back to exercise, even if all you do is take the stairs rather than the lift, take the dog for an extra long walk
or
pound the pavements
rather than use the car, it will save you scraping ice/snow off the car and do your body some good!
Most Christmas parties are over for the year but if you still have some on your waiting list, make sure you get out on the dancefloor and 'shake a leg' or two to keep those calories burning.

But if you do decide to gorge now and pay for it later - but not with your bank balance - there's a new gym called payasUgym which could be just what you need:

PayasUgym is an online gym network with no membership fee that allows customers to find a gym from over 100 in the UK, book a session and pay per single visit.

Launching on 21st January in London and the South East and later in 2011 across the UK, this unique programme quite literally means gym-goers can ‘pay-as-they-go’ by simply visiting the website www.payasUgym.com, creating a payasUgym account for free, locating a gym and purchasing an e-Pass which will be redeemed at the chosen gym’s reception to gain access.

Visit payasUgym to find more and in the meantime, get your walking shoes on!