The lure of fashion – Am I wearing fashion, or is fashion wearing me? 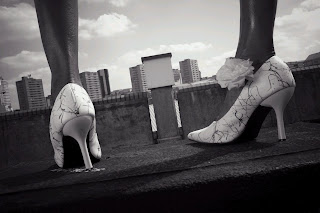 The Pied Piper of Hamelin. A fictionary figure whose tune was so sweet, lullaby so intoxicating and lure so inviting, all he called followed him unquestioning - vermin and children alike as lambs to the slaughter. Called in to rid a town of an unwanted pestilence, he delivered - but when compensation ought to have been forthcoming, human nature (AKA greed) stepped in and the piper’s revenge was swift and unpredictable, non-violent but all at once, wholly invasive and terrible nonetheless. If, to quote Hamlet, all the world’s a stage; allow me to set the scene for you.

Suppose the glossy magazines and couture designers of our modern age enter the story in the role of the piper. And that I substitute that infectious melody for daring design, vibrant colour and waif-like frames…..Oh! (Oh! To be read in that ‘Columbo’ manner - as though my next statement, so important, had almost slipped my mind) Oh! For my grand finale - my piece de resistance if you will, ladies, I - much like the pied piper himself, ask you to follow me.

For now the piper will claim payment in the form of that which we most value.The key to our own future and the hope we all have to better ourselves. Friends, sisters, women folk lend me your eyes and observe the state of society and the role we have had carved out for us.

What I propose is that the modern day piper, having initially fulfilled his part to perfection (that of a delightful distraction veiling the extermination of vermin/style crime/people still shopping at Morgan), has sent society to the debtors.

The bill is in, the invoice is outstanding and this figurative Shylock wants his pound of flesh. In our modern day market where brains often take a back seat to beauty and where woman aspire to an image of perfection forced upon us by ‘the man’ - are we forgetting that fashion is/was never meant to be dictated? It is an expression of self, who we are and who/what we want to be. Are we trading our self esteem as currency?

To the discerning reader, it will come as no surprise that I love fashion (typical. She bashes the industry for 300 words then drops the surprise twist - like you’ve never seen that before…), fashion is a physical illustration of hopes, dreams and fantasies.

Our desires are smoothly uncovered as a legion of magicians - Cavalli, Mouret, McQueen, MacDonald - capture of essence in fabric, cut and colour.We love that one dress that transports Charlene to Charlize, who we are matches up with who we want to be. But clothes, accessories, make-up, image are just that; IMAGE. They don’t change, repair, recreate the foundations of who I am. They are my tools to enhance me. Reflect me. Display ME.