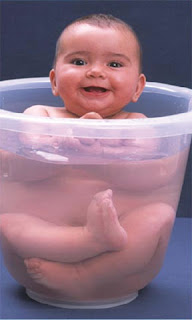 I'm kind of a long shower girl so when streams of lovely hot water gradually became lukewarm shudder-inducing terror, I figured I'd used up our morning supply and simply got out, dressed and forgot about it.
Two days later we are still not recipients of hot water. Yesterday I remembered that cold showers are supposed to be good for the skin so I decided to go cold turkey - literally. And for those who haven't tried it, it was a
bad idea. I spent the entire time shivering
- all 120 seconds of it. I should explain that this
is understandably the fastest shower I've ever had. I didnt learn. Later that day I decided I could benefit from a proper shower so I decided to use our portable heater to make the bathroom as hot as possible, waited until I was almost sweating and then jumped in to soothe my steaming skin with the
cold relief of cold water...
The pleasure of that lasted about 10 seconds until my body realised that:
a) It was not in the middle of the Tropics and
b) the heat from
my substitute sun
only worked when I was standing on the floor since while I was actually in the bath, it was blowing right into the
side of the bathtub.
For the first time ever I lamented not living in rented accomodation. Long gone are the days when a quick call to the landlord or letting agency would result in a fixed roof or perfectly working radiators and all without an extra penny spent. I don't know much (ok, anything) about boilers but I do know that they aren't cheap, so we're pretty much relying on the previous owner having sorted out the warranty so that we can keep our money for more important things like shoes. (Just kidding!)
In the meantime, I've had to go back to basics and for those of you without a Nigerian (or indeed African) upbringing, I want to introduce to
you the concept of 'bucket baths'. All you need is a bucket and small jug or bowl and a source of heated water. Since I couldn't just run it from the tap, I had to heat water in a huge pot on the stove and then pour into the bucket which I'd placed at one end of the bath.
I then ran cold water from the shower head to get the water at an agreeable level for my skin - i.e. not boiling. Once it was at the right temperature I crouched in front of the bucket and used our measuring jug to pour water over my heat deprived limbs.
It's amazing how little water you use when washing this way. Whereas I can easily send 20 minutes just luxuriating in the streams of glorious (and normally hot) water during my daily shower, today I spent just five minutes in the bath and used one bucket of water.
To be honest, when I hear about hosepipe bans and the call on us all to reduce excess use of water, I don't take it very seriously. After all, the water never stops flowing from the tap, cold or not cold, and so the
idea of it actually running out never occurs to me. I tweeted about my 'boiler problem' and one of my friends who lives in Nigeria responded with this unsympathetic response: "Infrastructure down. No water for most people full stop. Bet you're pleased it's only a boiler!"
According to the BBC, we are living in a world water crisis
as
the world's supply of fresh water is running out:
In Nigeria, half the population has no access to clean water, and as in much of Africa, many women walk for hours each day to fetch it. It's one of those things we hear all the time but I don't really think about what it means.
I'm hoping we'll get our water sorted this week
and I also plan to shorten
my showers and truly appreciate the value of water.
Please support Mothers' Union as it tries to make a drop in the ocean difference in the areas that need it most: Mothers' Union relief work.
Thank you :)