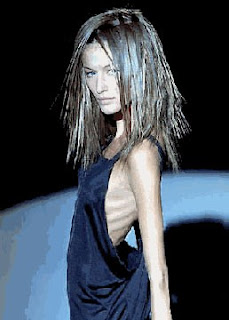 Size zero is the U.S. equivalent to a UK size 4, (What is the point? Why not shop in Selfridge’s Kids section?) Hence a U.S. size 2 is the equivalent to a U.K size 6 and so on, and so forth.

If you shop in GAP you would have noticed the difference in sizing which often results in me coming back to return items of clothing. (It’s quite embarrassing when they know who you are at GAP in Brent Cross..)

Just for the record, the size zero debate was re-ignited by the Uruguayan model Luisel Ramos who collapsed after coming off the catwalk during Uruguay or Brazil (can’t remember), fashion week in September 2006. Reportedly 5ft 9in and less than 9st with a BMI,- Body Mass Index being the measure of body fat based on height and weight that applies to both ADULT men and women, - of less than 18. The World Health Organization states that a BMI below 18 is unhealthy and 16 and under is classified at starvation level.

The controversy was fuelled further when Eliana Ramos, the junior sister of Luisel Ramos died from a heart attack having been seriously malnourished.
Apparently an agency had told both sisters they had potential but that they needed to lose weight to progress in their careers. They later found that Luisel weighed in at just over 7st, 98lb or in metric terms 45kg. (Urggh! Painfully thin.)

So there is the issue of whether or not to ban these models from catwalks (and kudos to the Italian designers who did so) maybe to make them feel better about themselves or create moral upstanding in society) who knows?? Ten out of Ten for perceptivity, yes they look hideous, yes they are an influence on young girls today.

Hell yeah, it might be a good idea to ban, skinny females that lack the beauty of curvaceous womanhood in the name of some drug-driven psychologically deranged aim of being of Uber model status. Where is the attraction in that?
Erin O’Connor who spearheads the recent Marks and Spencer clothing campaigns (believe me M and S is cool again, I can testify to that) alongside sixties model icon Twiggy, was told she was too big for the clothes.
O’Connor measures in at a UK size 8 (well below the average UK dress size 14), simply replied “Why don’t you make them bigger?” (You go girl!!)

So as I think of Wagamama’s, followed Haagen Daaz ice cream (cookies and cream, or pralines) and in the light of this controversy here are two videos; the former to make you celebrate women of all sizes and the latter for you to have a “laugh” or be in awe at the capabilities of some women.

Ok, I guess we should all agree that we don't need to get THAT big in the name of rebellion against size zero but I’ve written a page and basically said EVERYTHING people want to hear. (The funny thing is, I didn’t have to think too much about it)

Having thought it through……
I was sceptical about Italian designers banning size zero models, I feel it was to APPEASE a collection of people and yes we believed the hype (as my cousins will say “It’s a hype ting”), and it worked to their advantage.

I previously stated that Luisel Ramos’s death RE-IGNITED the size zero debate, because it is nothing new, we haven’t gone through a period of enlightenment where it just dawned on us that size 0 is practically a sin (our bodies being temples etc.. 1 Corinthians 3 vs. 16-23) and that use of recent technology has allowed embark on this discovery. Size zero is inescapable; it lurks between the pages of high fashion magazines and dances its way to the top of pop charts.

It’s that rash on your derriere that aggravates your skin, in turn you scratch and although your distress is temporarily alleviated, in due time it is back to create havoc, and is in need of a permanent remedy.
In my opinion (yes I hear shouts of “you idiot!!…how can you say that?)

I don’t think size zero models should be banned. It’s the nature of the business and clothes are often made for people of that physique because they hang better (A Vogue stylist’s words not mine). So a few skinny people should take responsibility for the death of a model? Is what I’m getting at?

That’s like the Black community asking Tony Blair to apologise for the slave trade, “Why should he”, he wasn’t there when it happened, doesn’t know Mr. Jackson from Alabama plantation, neither could he have prevented hundreds of years of inhumane treatment of a particular ethnic group.

Some models are naturally skinny and are put on a pedal stool for their physique only to be taken down when it suits people. (for the record I am not a model, I am 5ft 8in, but these hips won’t allow it) Its up to us the consumers to do something about the situation i.e. Topshop should sell sizes beyond size 16. And not “tent like” ensembles with graphic designs from Celia Birtwell either.
Size 0 wasn’t banned in Paris and London fashion week, and we still applaud these designers. They are not doing anything about it so on to plan B of highlighting size 0 issues. What about suggesting government initiatives i.e. classes such as citizenship on how young people are affected by society, or if that is asking to much highlight issues like this in classes such as P.S.E. (Which is taught) in secondary schools.

What about the parents of young females today, are the channels of communication open at all times? (Many girls have abortions...and go through the process alone).

I believe people should be encouraged to have a plan B when it comes to professions such as acting, modelling or becoming a musician. Classes like Citizenship inform the individual on how they can contribute to society in their own unique way. “Joe Diehard” or “Katy I-Can-Do-It-All”, will never admit they incapable of doing something and in turn continue in the wrong profession.

My hair will never be straight, and my dog will never do magic tricks (does the scripture many are called but few are chosen come into mind??) simply get another profession, don’t discriminate against those who can model or encourage those who can’t.

Most importantly as Christian females, we need to know who we are in Christ (study Philippians 3, I don’t want to stand on a pulpit). I know for a fact Jesus wasn’t starving for any one in particular.

The size zero debate is defunct, we are approaching it in a regressive manner and suggesting solutions that will not curb this fad of “starving for perfection”.

(Hope I’m making sense, as I’m trying to fit this in between an essay on globalisation and drinking peppermint tea to SUPPRESS my hunger…. NO I do not want to be a size zero… yes I’m a BROKE student)