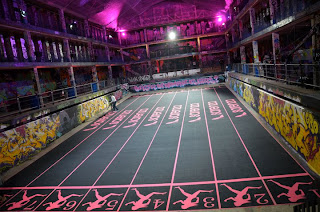 No it wasn't sensible but it was definitely fun! Last weekend, I
went to Paris with two friends to participate in the high heel race organised by French shoe company Sarenza. I went because it was a free trip to Paris and not because I was actually interested in winning the big prize. (Ok that's a tiny lie because let's be realistic, who wouldn't want £3k worth of shoes???)

Anyway we were told to dress up so we went loosely with an outfit of 'Boarding School Tweed'. I thought I looked quite good in my tweed with leather patches Zara blazer, tiny cream
pleated skirt and dual colour tights (one leg black and one leg cream), but it was clear upon arrival that the French girls take this very, very seriously!!! This is Sarenza's 3rd annual high heel race and everywhere you looked, the French
girls
were hurridly wrapping reams of
duct tape - yes,
duct tape - around their feet to keep their shoes in place. Where normally I like to be 'different', I decided that was not the time to debate whether spending the evening
lying on a stretcher courtesy of Red Cross was better than jumping on the bandwagon avec filles françaises.

Unfortunately the Stiletto Sisters as we so gallantly called ourselves, were out at semi-final stage so we didnt get the prize much to my Fish's relief (he has
only just managed to cram all my shoes into our room), but we did get goody bags and an all-expenses paid trip to Paris so I guess I can't really complain... but a note to anyone with plans to replicate this event:
duct tape is your best friend.

And of course being the culture sponge that I am, I now want to speak fluent French and live in Paris and ride the metro every day...which is not going to happen :(
Ah well, c'est la vie! 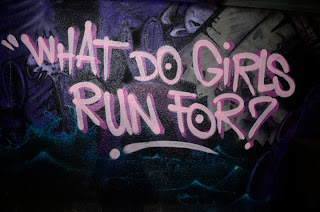