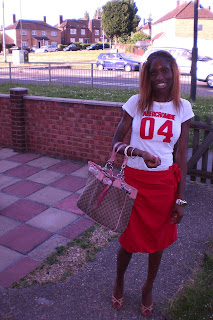 Song on my mind: Miss Independent by Ne-Yo

An' she move like a boss
Do what a boss Do,
She got me thinking about getting involved
That's the kinda girl I need

'Cause she work like a boss
Play like a boss
Car and the crib she 'bout to pay 'em both off
And bills are payed on time, yeah
She made for a boss
Slowly boss
Anything less she telling them to get lost
That's the girl that's on my mind

Miss independent
That's why I love her

Ok I actually thought this song was called Miss IndepenDENCE - so I'll continue to pretend it is otherwise it kind of ruins the twist at the end - and yes there is almost always a twist!

Today................I joined the Rat Race. My new job is based in Westminster and as someone who LOVES to drive I have always said it would take my dream job and salary for me to make that daily 'commute'.

(I say commute in quotes because my idea of commuting is going from NW London to SW London. My new boss however, makes the round trip from Eastbourne to SW every day!)

So anyway I dragged myself out of bed at 6am and did the safe head to toe black top and bottoms thing with a multicoloured shawl thrown in for good measure. I left my house at a time at which I would previously be waking up :( and made my way to work. I got there about an hour early like the eager first timer I am and found a coffee shop to wait in.

Now considering I am on very SHORT funds as its the end of the month and I had to pay an extortionate amount of money for my travel card, I had already decided not to spend any money on food. This plan lasted as long as my pizza did on my plate this evening. I got a 'short' latte for £1.55 which was slightly bigger than a yoghurt pot and a slice of banana cake (with walnuts - YUK!) for £1.35 which took me all of 5 secs to inhale.

In the past I have worked for ELLA Models off Oxford Street, Storm Model Management off Kings Road and Frank PR in Camden but not once did the reality of this kind of job hit me as hard as it today! Not only have I joined the hundreds of thousands of people cramming into the tube system as a means of day to day existence, I have also joined the 'City Folk'.

The City Folk drink Starbucks for breakfast, munch Pret (A Manger) for lunch and Marks (& Spencers) for dinner. (Does anybody actually cook?!) I dont know how they afford it as well as the credit crunching operation called the Oyster card but they do. They know all the jargon for coffee - latte, frappuccino, Vivanno - and you can have these in large, tall, skinny...and the list goes on! They walk briskly around London in their MBTs and whip out sexy Louboutins for the office, ignore the hard working Metro peddlers and buy the Times from their favourite seller instead while giving me disapproving looks as I rush to get not only the Metro but the London Lite AND The London Paper! (What can I say, I like to read!)

I began to plan tomorrow's outfit in my head determined to look cool, sophisticated and confident but then I wonder what happens if it rains and my hair goes frizzy? Or I run out of money and cant buy my morning latte anymore? Or my heel breaks as I run - delicately of course a la whatsherface in The devil Wears Prada?

Of course I know its all about the inside and not how you look like blah blah blah but it helps to look the part and trust me I know, ask me how I got my previous job! (That was a joke for the Work Police out there :s)

So instead of trying to LOOK the part, I spent the rest of the day really getting to grips with the role and what I am expected to do. But it did get me thinking, thinking about me and my career. In 24 I wrote about how I felt stagnant... I now feel God moving in my life and am both scared and excited for my future.

In my old job I was, admittedly, a pretty small fish in a huge pond. Now however, I'm a much bigger fish in a smaller pond. And it makes a difference. In a couple of weeks I'll more or less have my own office, small as it is and I will be in charge of alot more than I was previously.

Responsibility makes me pay attention and sit up. I can feel myself getting ready to rise up to the challenges I'll face with a resolute determination because what I do is actually important within the cogs of the company I work for. I've always been pretty sure of what I wanted to do career wise and a friend commented today that I'm very driven and the kind of girl that guys see as 'Miss Indepence/Independent'. I wouldnt call myself that but I have some very good friends to whom I would give this title.

To me, a Miss Independent not only comes across as not wanting a man, she actually doesnt. She pays for everything herself, gets and does everything herself and a man would be an inconvenience. I'm perfectly happy to pay for stuff myself if I need to but I love when people pay for me, when people buy me presents or take me out as a suprise.

I had foster parents when I was very young and they are now in their 60s and one of the happiest couples if not the happiest couple I know. Every day at 11am my foster dad calls his wife just to see how she is. She gets up early to clean the house and make him his packed lunch. Some people claim to hate this stereotype of working husband and housewife but they are happy in it so why condemn it?

Personally I think I need to work to maintain my sanity but why should you have to? Why are women constantly trying to prove we're equal to men? We're not! (Our bodies are much nicer for one...sorry but its true..)

I'm all for doing my own thing and I do, all for paying my own bills (only if I have to) and I do but I cannot live alone. And I'd be interested to know if guys really are interested in these Superwomen? And if so why are so many of them single? (The Superwomen I mean, keep up!) Traditionally the man's role was to provide and protect right? Like God and His people, like Christ and the Church. In Christian marriage, God is the head of the couple and the husband is the head of the family. For the last 50 odd years we have seen the deterioration of the nuclear family and many more women are heads of their families. Is this out of choice or because there is a lack of headship from men?
Are we as women becoming more independent because men are failing to be dependable?

(That's a genuine question by the way, please feel free to comment!)

Beyonce and her girls did their whole Independence thing a few years back but with Beyonce getting married this year, albeit to Jay Z, apparently Beyonce had the same syndrome as me; her Miss Independence was really Missin Dependence.... ;)