January Randoms – Day 2: When the going gets tough, Selfridges gets Primark 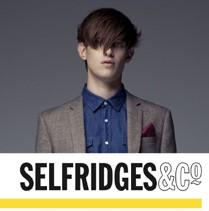 Let's face it, men's fashion of late
has
been pretty poor.
At least it has been for
men. They're not all boy band wannabes living in the trendy areas of our cities so why can't they buy regular jeans instead of skinny? or t-shirts that cover their chests instead of having to shave their hair so they can wear horrible tees that look like someone has carved a V out of the front?

I'm aware that the hundreds of thousands of women wearing 'boyfriend jeans', 'boyfriend cardigans',
'boy's shorts'
'boyfriend shirts', men's brogues, oversized jumpers etc will largely disagree with me but if our boyfriend's clothes are so appealing, why aren't they wearing them?

Anyway
Selfridges
is obviously thinking along the same side as me which is clearly why they decided to
invite Primark to open
menswear concessions in their Birmingham and Manchester stores. Yes you heard that right - Primark. Primark of £2.50 T-shirts and £1.50 knickers!

This isn't technically news per se
as it has been open for about a month now - how did I only just find out?!
-
but I'd be interested to see if London follows suit...

One response to “January Randoms – Day 2: When the going gets tough, Selfridges gets Primark”