It takes two to tandem 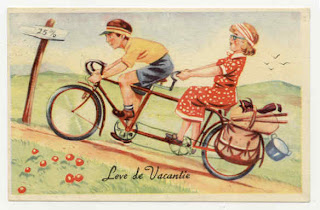 Recently my husband and I took a trip to New Forest and decided to try out a tandem. Without really discussing it, we both knew that my Fish would go in front and I'd go behind. The person in front has to both steer and pedal but can't really move the bike without the person behind pedalling at the same time.
We were given a quick explanation of this and after a quick seat adjustment, we set off.

I automatically fell into tune with my Fish's feet and happily left him to do all the navigating - even letting go of the handlebars when we went downhill. It was bliss!

After about an hour
of cycling and exploring the woodlands we decided to swap places. That's when it got complicated. I am not kidding when I say that riding a tandem is like the
work-out version of a marriage prep class! I got on the front seat, steadied the handlebars and got my feet ready on the pedal ready to set off and....bam! The bike wobbled, I couldn't get it to balance and we both fell. We tried two more times and the same thing happened! I couldn't see behind me so I didn't know what he was doing but apparently he found it hard to adjust to the fact that he'd just be a 'follower' instead of a 'leader'. He kept trying to lead with the handlebars which threw the bike off-balance and stopped me going where I was trying to go!

It's a pretty good indication of our relationship. We both work
and I intend to keep working after we have kids but when it comes to the two of us, I trust my boy and am happy to let him lead us where he sees fit. I am perhaps, a natural 'follower' where he is a natural 'leader' and so we fit. When the situation was reversed, it didnt work as I wasn't strong enough to overturn his natural instincts to take charge!

Like I said, it's not something we've ever really thought about that deeply but it's interesting that it should be shown so clearly after a ride on a tandem. Want to see if you're suited to your partner? Take a ride on a tandem and see what it tells you about your relationship!

3 responses to “It takes two to tandem”