So today I went with David Koma which is pretty fitting since he is the recipient of the British Fashion Council's New Gen initiative, sponsored by Topshop and I've discovered a rather large part of my wadrobe is from the very same. 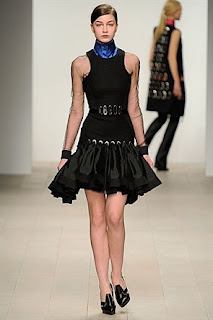 If I'm honest, it's been a bit stressful doing Fashion Fare for the last few days. Late nights and early starts mean I'm usually pretty groggy in the morning (also not my most favourite time of day) and having to do a mental scan of my wardrobe to fit in with the previous day's shows has become, quite frankly, quite trying!

However I have re-discovered old and abandoned items such as my hooded top that I wore on day 4, bought more than 5 years ago and have only worn once before, and old and once beloved items like my gold trainers which have now gone back to being a staple favourite. 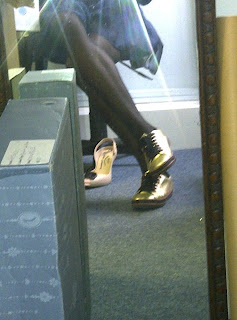 So, gold trainers aside, here is the look according to my wardrobe: 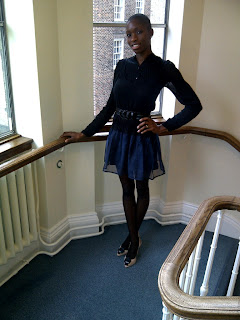 Although I didn't have a shirt in the same blue as the model's, I had a dress with a tulle skirt in a similar blue so I figured that would be my intepretation of the blue in the original outfit!

The model didn't wear tights but it was freeezing today so I wore tights, well sheer stockings so that my legs still had that 'bare' look. 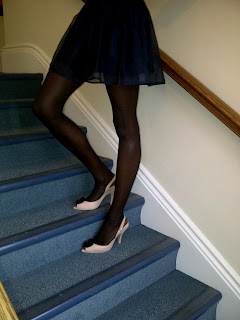 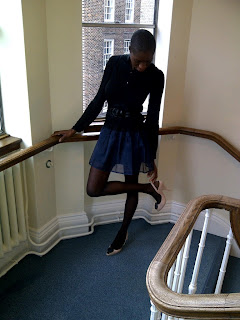 The shirt was not as see-thru as the David Koma but is the most see-thru I own and yes for all the beady-eyed readers I know I did not wear black shoes...

But to be honest after the last three days I'm pretty bored of wearing Black. The hoardes of people on my tube in the morning are always in drab greys, dark blues and blacks so I wanted to lighten it up a little.
Plus I'm disappointed I haven't been able to do a Vivienne Westwood look this week so this way I get to wear her shoes anyway!

This was another practical outfit but still classy enough to attract positive attention. I normally wear this dress in the summer with bare arms but teaming with a light shirted material means I could carry this off as an Autumn/Winter look without the normal bulk of layering.

My husband will say that I've got enough clothes but over the last few days I've realised that between starting at university and leaving it, I've somehow lost the passion I had for maintaing my own personal style.
Why is my wardrobe so dark and uniform? When I was younger I didn't have much money to spend on clothes so I would cut up jeans and create a whole different look with them, I'd create images on the computer and then get them printed onto my tops, I'd buy dungarees in the kids section so they'd be cheaper (and tighter) and then wear it with heels.

As I've gotten older its become more important to me to 'fit in' so I've stopped doing what isn't seen as generally acceptable to those around me - my friends, family, workplace. Plenty of times in the last few years I've asked friends what they think about a purchase I was considering and their negative responses have often put me off buying them. Purple paint-spray jeans, skinny white leather trousers (luckily I did eventually go back and get these!), gold wide-legged trousers..

I love clothes and I love styling and although I have no plans to design my own label I have realised that I do like doing things differently and being thought of as weird for what is actually my own personal taste shouldn't stop me from being me.

Thanks for all your comments, I hope you will keep reading to see what I'll be doing next!