So we're already in the throes of the international Fashion Weeks which determine what we will be wearing come Autumn/Winter 2012 and today is Day 2 of London Fashion Week. But for me, the fun starts today.

I love fashion, obvs - the clue is in the name of the blog - but I wanted to know how easy it would be to make the transition from catwalk to sidewalk (that's pavements to us non-yankees) without having to buy the copycat version from Primark.

For me, real Fashion is about styling and creativity so I've decided to try and recreate one look from each day of London Fashion Week (Hereafter known as #LFW) and see just how wearable it is for the average person trying to get about on public transport, in all types of weather and carrying everyday stuff.

Please let me know how well you think I did and comment on how I could have done it better! 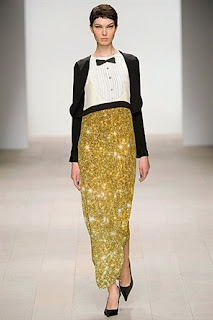 As the opener for #LFW I expected this to be a good show but the reason I chose this particular look was because, as separates, I felt I could make it work.

I don't usually go for long skirts as I hate it when things drag on the floor but at a session with styling guru Tanesha Westcarr of StylingSays, I was told that they suit me so I went for it!

Ok perfecting this look took several attempts so bare with me.... 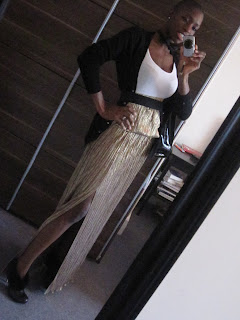 Do my boobs look big in this? Yes. Are my feet going to hurt after walking in these all day? Yes. 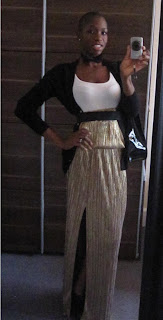 I had everything in my wardrobe except the shirt! But borrowing my husband's bow-tie gave me an idea...

Ta da! Quick change of shoes and husband's shirt in tow I finally had the completed look! Unfortunately I decided the shirt was too big and ditched it for my trip to Brick Lane for the first show of the day and also, in honour of being in Brick Lane, put my vertically-heeled All Saints shoe boots back on for the journey back to their birthplace in Spitalfields.

Lots of stares as I stumbled down my road to the tube station but not sure if this was because of my unusually glam outfit or because of the way I was walking - with difficulty. Luckily got to the station just as the train arrived and despite the initial foot pain I was still in good spirits as I arrived in London to find the tubes in chaos as usual and no tubes going to my destination. Now I'm used to London Underground and its inefficiency and usually I would huff and puff and get on with it. Not so with 5inch heels on, a long skirt and the rain. Oh did I mention I wasn't wearing socks? 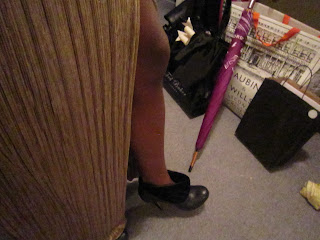 So I was basically trying to find my way in the pouring rain with one hand holding both the umbrella and bunches of my skirt to keep it off the floor and the other on a map getting steadily soaked with every step.

Arrived at the show after 20 minutes of trying to find other fashionable looking people to follow - #fail - but just used the map in the end. Honestly I thought Brick Lane was supposed to be a trendspotter's paradise?

Seated in the front row of the Faith4Fashion event I managed to attract more stares but probably because I couldnt work out how to use my iPad to take pictures of the show rather than pictures of myself. (The self-facing camera is a fab idea in theory...)


The show was fab and I'll post more about it when I get the official pictures back but I started to panic when I realised I would have to stand up and go to another venue when the show was over. Meeting one of my model friends backstage I spotted her FLAT boots and almost cried. Met the son of another friend organising the event and begged him to swap shoes with me. He declined. 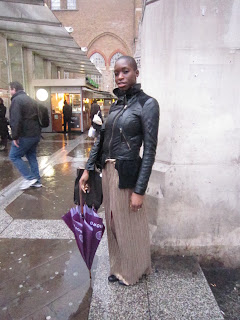 To cut a long story short I couldnt bear to go to my second appointment of the day and staggered home instead while still trying to keep my dignity as a well-dressed fashion-y person. (Although I think this persona was waning from the minute I stood up after the fashion show.)

Why do designers always stick models in ridiculously high heels on the catwalk, even in ready-to-wear?? More flats on the catwalk I say! Bit like J.JS Lee who had her models in low-stacked boots for her show earlier today.

Anyway although I think on the whole my copycat look was a success, I have learned the following:

a) There's a reason models don't have boobs
b) I should have worn the tuxedo shirt and not a tight, white bodysuit
c) I do quite like long skirts but the slit isn't very appropriate for everyday wear especially if it keeps sliding

Let's hope I do better tomorrow!