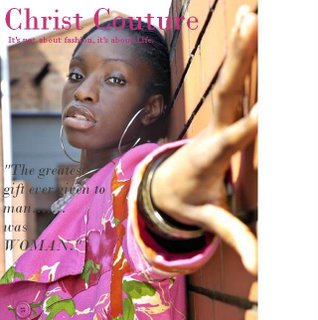 Christ Couture™
Fashion beyond the Cross

Christ refers to the Son of God. Couture is a French word, which means ‘high fashion designing’ (Collins Softback English Dictionary, 1992). ‘Christ Couture’ is a reference to women who have accepted that Christ is their creator and therefore that they have been designed by Him in ‘high fashion’. So Christ Couture is just a fancy term for Christian women!

‘Fashion beyond the Cross’ defines the walk (or life) of a woman once she has accepted Christ. In Christ Couture, it is ‘fashion’ that brings women together and Christ who leads the way.

In Christ Couture, I aim to provide a fashion, lifestyle and entertainment magazine for women aged 18 – 30, who are trying to follow the Christian way of life.

Predominantly, Christ Couture will enable these women to have their fun, faith and fashion needs fulfilled in one magazine.

My vision is for Christ Couture to be known as a Quality magazine, which promotes a lifestyle that successfully, manages the balance between living a Christ-focused life and fully enjoying it!

THE MARKET – Who are the readers?

While He was alive, Jesus Christ was the life and soul of every party.
He told His followers that they were to be the salt of the earth – the real flavour! And for His first miracle he turned water into wine at a wedding reception so that everyone would have a good time!

Christ Couture is for women who emulate Him in this fullness of living life. Primarily for Christian women between the ages of 18 and 30;
- They are highly socially adept, law-abiding members of society.
- They are women who enjoy a broad range of interests such as fashion, restaurants, holidays, cars, concerts, films, theatre and more.
- They are leaders in their field whether they are CEO’s, graduates, mothers, etc.
- They have a high level of disposable income, which they use freely to enjoy themselves.
- They desire to live a prosperous and Christ-centered life but do not want their lifestyles to betray their professed belief.

On the other hand, Christ Couture aims to be widely inclusive because the true message of Christ is that of ‘inclusivity’, which is simply to love. I believe that there are women in the UK who claim a mixture of races, beliefs and cultures, and yet will find a true handbag mate in Christ Couture. Like many Christian women:

- Such women want to buy clothes that are both classy and modest without being any less fashionable.

- They want to buy music that is current in style and clean in lyrics.
(I do not think that I am alone in saying that an artist can spoil a good beat simply by cursing over it.)
Christ Couture opens up a world where artists sing music that is lyrically ‘clean’ – where you do not cringe at certain points of the song or have to turn it down at risk of offending anyone.

- These women want to watch TV that is not X-rated or excessively violent. I call it ‘moral eye candy’!
(More The Cosby Show and Everybody loves Raymond than Sex and the City or Hollyoaks.)

There are only a handful of women’s lifestyle magazines currently in the UK market specifically for Christians but readership is low in comparison with secular women’s magazines with even the smallest market share (based on circulation figures). Primary research led me to discover that people think that following Christ requires a rather boring, fun-less existence - including some Christians! It follows then, that Christian lifestyle magazines are not seen as attractive.

Generally, Christian women struggle to maintain a balance between a ‘godly life’ and dealing with the temptations and desires that are a normal part of everyday existence. But everyone needs light relief, which, especially for women, can usually be found in the form of magazines.
To my knowledge, no young women’s Christian magazine yet exists to achieve this balance and so this is where we seek to fill the market niche and become the discerning young woman’s handbook.

Christ Couture is a Quality magazine for young Christian women (social groups ABCD1) and I am currently trying to set up the online magazine at www.christcouture.co.uk
Any help with printing, ideas, editing, contributing would be much appreciated and since mine had to go away for a while, we need a fashion photogapher!