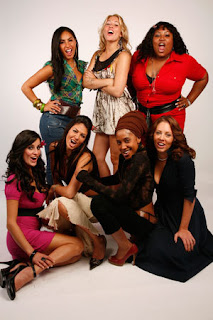 I think this show is actually crazy so I cant really explain why I started watching it..but Tyra Bank's Show had a lot to do with it!

I dont mind admitting that I'm quite an emotional person, for example when I get really, really angry, I usually just end up crying so Realilty TV shows can be pretty heart wrenching experiences for me! My friend and I were watching a RTVS a while and wondering why all the contestants seemed to have such sorrowful stories and backgrounds? Surely someone was ok?! One of the contestants' fathers had died of cancer, a male contestant was a single dad to his young daughter after the mother had left...you get the idea. They usually ended up crying on screen and yes, I'm not ashamed to admit it, I cried too!

It got me thinking that maybe the only way producers can keep ratings up on these shows are to cause controversy or to create tear jerkers. It amazes me that there are people, companies out there who have so much money that they will use it to buy/build a huge, beautiful house and stick a group of people with unresolved issues and controversial views on eachother's backgrounds and call it a TV show...and people watch it. People including me. It's a little sick actually.

So after spending the morning watching re runs of Bad Girls Club, I feel as though I 'like' 2 of the girls from Season 2 - Taneisha and Darlen. Both of them are feisty and aggressive when provoked but two things stuck out for me about them and made me rate them above the other girls. Taneisha forgave graciously and was able to be restrained when realisation hit in that she was wrong. Darlen was only really aggressive when drunk and admitted she had an issue with both drink and anger from the beginning. Neither of them came across as manipulative or self-seeking and I saw them both very close to tears but they never quite made it. Other girls cried but I could see the self-pity in it. I even cried at one point and I realised that we all just want acceptance right?

These shows always ultimately have a 'winner' and the contestants spend the entire time trying to please somebody and make them think they're the One - to win the guy, the money, the lead West End role, whatever. It can be soul destroying for those who put their all and hope into winning but, and this is what I told my friend who recently came out of a RTVS; for those who know in whom their hope is found, they will never 'lose'.