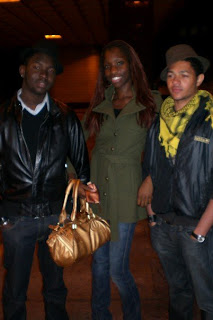 Take me to New York, I’d love to see LA.

I really want to come kick it with you.

You’ll be my American Boy.

Can we get away this weekend.

Take me to Broadway.

Let’s go shopping baby then we’ll go to a Café.

Let’s go on the subway.

Take me to your hood.

I neva been to Brooklyn and I’d like to see what’s good.

Dressed in all your fancy clothes.

Walkin that walk.Talk that slick talk.

Take me on a trip, I’d like to go some day

I really want to come kick it with you.

I love America and although my Cali based cousin claims its on its way to becoming a 3rd world country, I still plan to live there for a while. Everything in the States is bigger..and better right?

Churches over here peak in hundreds, American churches thrive in their thousands, over here cheesecake is sold in individual packs, America has a 'factory' open to the public so u can gorge on it all day, American men are waaaaaaaaay more fly (but am kind of biased here sorry for all the non-State based males hehe), clubs are owned by celebrities and run by their friends and 16 year olds get SUVs for their first cars. (Hope that makes sense am not actually sure what an SUV is...a big car though right?)

There was alot of hype recently in the news about the 'All Black Vogue'...which every Black person ran out to buy to prove...what? How many Black people do you know that can read Italian let alone speak it? why was the Vogue with the smallest circulation the only one to do this? Wouldnt it have been easier to do American Vogue? Mind you, Italian Vogue probably has the most influence in the Fashion indsutry and as my dear friend says, "what do Americans know about Fashion?" (No really?)

So why NY to do Fashion? Maybe because I've been watching too much SATC - thinking of starting a FB group: Who never wants to see Carrie Bradshaw's feet? - because it certainly isnt the wardrobe of the entire Girlfriends cast calling to me. Dont get me wrong I absolutely LOVE London although I'd rather live in Chelsea than NW London but I DISLIKE Congestion Charges, London Transport, paying to park outside my own house and the rain. Oh and the city's inability to deal with rain. Or sun. Or any extreme weather temperature for that matter. It's ridiculous! Oh no its snowing there's ice on the rails trains out of action motorways jammed cant go to work/school/hang around Covent Garden waiting to be spotted like Naomi Campbell. Then lo and behold the sun comes out; oh no its too hot people are suffocating on the underground stop the train we need air arrrrrrrrrrrrrggggggggghhhhhhhh!!! Londoners are crazy.

Anyway Americans think British people are quaint. And posh. Which we are, compared with them. So they love my 'accent' and want to know the age of the castle my family live in.

Another thing about Americans is that they dont know how to copy. When Americans do things the rest of the world follows and usually succeeds with a different version if not better. If you want an example of Americans copying the British, watch their version of The Office. Actually dont. It might scar you for life. In fact the only thing they managed to copy and improve upon it is the city of York. With ...yep you guessed it, New York. And I like new things... new shoes, new cars, new houses....so I know I will LOVE New York... :)

Am I shallow cuz all my clothes designer.

Before he speak his suit bespoke.

And you thought he was cute before.

Look at this Pea Coat, Tell me he’s broke.

And I know you ain’t into all that.

I heard your lyrics I feel your spirit.

And there’s something about Gladys Knight and the Pips in there, can’t quite hear it…But I still talk that CAAASH.

Cuz a lot WAGs want to hear it.

The Pimps at their Gladist.

And I know they love it.

so to hell with all that rubbish